At work, I have had exposure to both Amazon Web Services (AWS) and Microsoft’s Azure. I wanted to set up a personal site on Google Cloud Platform (GCP) for the experience and to have a point of reference in comparison between the top cloud providers.

I have learned that the free tier offered by GCP is pretty incredible and that to host a basic site can be 100% free. Unless, of course, your site is crazy awesome and gets a massive amount of traffic, then your next step is to figure out how to add ads to generate revenue to pay for the extra fees incurred by all the site traffic.

In this part of the tutorial, the following sections will break down how to get started with GCP, create a basic site, and deploy the site to AppEngine.

Go to GCP, and sign up for the free trial to get a \$300 credit: https://cloud.google.com/free-trail.

Note: The credit is just for the first year, and for this tutorial you should not incur usages fees.

From your new account at: https://cloud.google.com click on the Go To Console button to be redirected to: https://console.cloud.google.com where we will remain for the rest of the online part of this tutorial.

Note: If you have trouble following the steps above, use this URL and click Create to get to the same create project page.

Type gopher-root as the project name, leave location as No organization and click, Create.

A notification should popup saying the project is being created.

Go to the top menu, click Select a project  that is to the right of   to open popup modal again and this time select the new project, gopher-root.

Open the SDK download page and choose the install for your OS.

The step above will take you through a series of steps to connect your GCP account to gcloud. Follow the prompt to log in: Y and then login to the browser window the terminal opens for you. Once logged in, choose gopher-root cloud-project when prompted if able. If not, use the default project in option [1] and do NOT create a new project [2] here as you can change it later. Because the new project was created asynchronously in GCP, the project list in gcloud will eventually show our project.

To show the authenticated GCloud account and default project:

In the last tutorial, the go code was just a basic print line to stdout saying «hello, world». Now, we need to get a bit more fancy and write a go server that serves up a static page.

Replace contents of main.go with:

Run code locally to confirm it works. In a terminal inside the gopher folder:

The terminal should update with a log message it started.

To stop the server, in the terminal window where it is running, press «Ctlr» + «c» to cancel. The terminal should print «exit status 2» in response and return you back to be free to type more commands again.

Next, we need to tell gcloud what code to deploy.

To deploy application to GCP - App Engine, open up a terminal and follow these steps:

Deploy the site as version 1:

Confirm the «target project» is correct, then press «y» to continue:

Then gcloud reports how many files were uploaded and then sets traffic to hit the code: 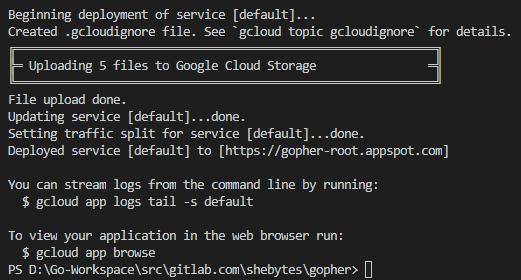 Open the target url and confirm site is live and working:

We just deployed version 1 in the previous step. Run the same command but with 2 instead of 1 at the end and watch the steps described in the terminal closer. When the code is successfully deployed, the traffic is switch to the new code path seamlessly and we can revert quickly if the changes had an unexpected «feature».

To change the default project intended to deploy to if needed:

Click the «Next» button below to proceed in this tutorial series to «Part 3 - Domain Hookup».